THE BEST 5 TIPS FOR PERFECT ABS

The real ‘trick’ to developing your midsection is creating a well-rounded routine which targets all abdominal muscles.Given that your diet is in order and you don’t pack excess belly fat, smart weight training will do the job.

These 5 advanced technique tips will help you to build perfect abs:

Squats and deadlifts are great for training your transverse abdominis (TVA), which is located underneath both the external and internal obliques – but only when you don’t wear a weight belt. Training without a weightlifting belt is the proper way to train your core muscles for strength and stability; the typical trainee has a weak core and using a weight belt only serves to mask this problem.

A weight belt offer important advantages for strength athletes, but it’s highly recommendable to focus on building substantial core strength before you start using it. Otherwise, over-reliance on a weight belt might cause your core muscles to become disproportionally underdeveloped. And the benefits from developing a powerful TVA include both improved aesthetics and improved lifting performance.

That being said, you shouldn’t rely only on heavy squats and deadlifts to get a complete abdominal training – as great as they are, these two don’t actively work your rectus abdominis through its full range of motion.

During ab exercises, you need to have a forward bending motion at the waist, above the hip joint, to cause the muscle fibers of the rectus abdominis to contract. Yet it is fascinating how many people seem unable to realize the difference between movement at the hips and movement at the waist. You can often see people do cable crunches with a flat back and by hinging at the hips, when they should be curling forward and down in a controlled manner to really work their abs.
At first thought, it’s kind of a good thing that people approach ab exercises with a flat or slightly arched back – that means they’ve learned the importance of protecting the spine during resistance training. However, if you maintain a flat back in the lumbar region during ab exercises, the rectus abdominis won’t be able to actively contract, and without achieving proper contraction, you can’t say you’ve trained the muscle.

3. Bring Your Legs Up Higher

Hanging knee and leg raises are great core-strengthening exercises that target the lower region of the rectus abdominis, hip flexors and lower back. To properly perform them, you have to avoid swinging the torso, jerking your legs up and hyperextending the lower back.
Instead, you need to maintain a still torso and focus the movement only around the pelvic area and legs, contract your core musculature to generate the movement, and keep your spine flat and neutral. If you’ve got these three under control, it’s time for the next big tip: get your legs up as high as possible. Most lifters are satisfied by bringing their legs up to the point where they’re perpendicular to the body and then they stop the motion.
However, this causes very little movement in the lower spine and this movement is mainly caused by contraction of the hip flexor muscles. Unless your pelvis and hips activate into a front tilt and move toward the belly button during contraction, your lower abs won’t be properly engaged. Next time you perform hanging leg raises, try bringing your legs up higher to really feel your lower abs working overtime.

Unlike some other large skeletal muscle groups, the midsection muscles contain a greater degree of slow-twitch muscle fibers, which is why many people think they should only train them with light weights for high reps.
However, this ‘rule’ is just as false as the one that says you should only train your biceps with heavy weights for a very low number of reps. In reality, your abs have fast-twitch muscle fibers too, and for optimal muscle development you need to adequately target them by using heavier loads for lower reps. Your gains are destined to stagnate if you only train within the same rep ranges and loading patterns, so you should alternate between different schemes to really sculpt your abs and achieve that three-dimensional look.

5.Build Progression Into Your Training 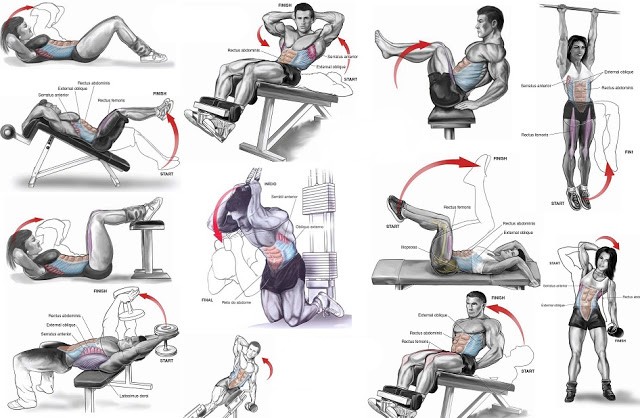 If you’ve been doing the same unimaginative ab workout for the last 12 months and you don’t know why you’re not making any progress, you need to rethink your approach. A handful of exercises done for 2-3 sets of 20 reps at the end of a training session is not exactly what makes abs grow. First of all, you need to stop putting them last, as this is a sure way to undertrain them.
To get great results, you want to hit them hard at the beginning of the workout while they’re still fresh. Then, you need to apply the same logic you use when you want to see your bench press go up, called progressive overload.
As your abs get stronger, you need to keep progressively overloading them to increase the stress, prevent adaptation and keep on making gains. Increase the load, up the volume and intensity or switch to more difficult exercises. It’s really as simple as that.

Previous ArticleABS DIET: HOW TO EAT TO GET PERFECT ABS !
Next ArticlePOPULAR TOOTHPASTE BRANDS TO AVOID ALL COSTS. THEY CAUSE DAMAGE TO THE PINEAL GLAND, THYROID GLAND, BONES, GASTROINTESTINAL TRACT, AND CANCERS.
Comments (0)