ARNOLD SCHWARZENEGGER’S TIPS TO A GET A BIG CHEST

NOW YOU HAVE NO EXCUSE.

Arnold’s Schwarzenegger’s chest has inspired awe and infamy in the heart of any a men. With two perfect slabs of semetrical stone he called pecs, he took the body building world by storm scoring 5 Mr. Universe’s and 7 Mr. O’s – no small feat. But how did he get his chest bulging from every angle along with a solid aesthetically pleasing look down to a science? Well follow us, let’s break down the sweet science shall we? 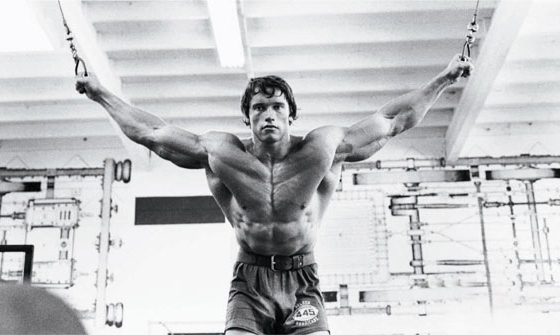 As we all know Arnold was a big fan of muscle confusion and pause reps, and he wants you to take the same approach to your outer pecs. His favorite to hit this are was with dumbbell ly’s. Take the dumbbell all the way down for maximum stretch. Then bring them back up but only to three quarters. Stop right before the dumbbells get to your pecs. This keep the TUT (Time under tension) in your targeted area for a longer period of time which increases muscle mass. This will give you that world renowned look of fullness Arnie was so famous for. Top that off with some 3 quarter dips and Bob’s your uncle…or Arnie in this case. 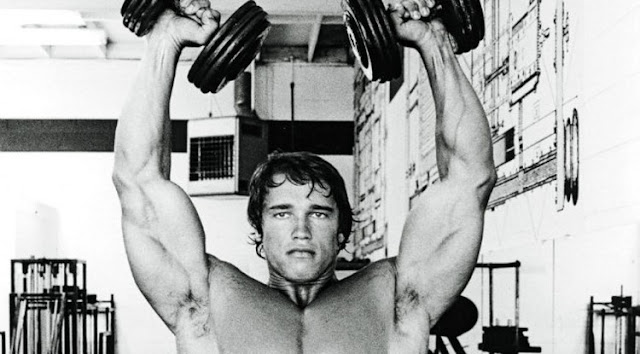 DRAW THEM ON
No, don’t literally draw them on silly. Draw them on using the cable crossovers as your marker and your inner pecs as the pad. When your doing the cable crossovers make sure to squeeze and flex your chest at the point which your arms touch. Whether they actually touch or not, if you squeeze at this point it will give you that etched in line down the middle of your chest. Not exactly Crayola, but you call this one the magic marker.You can implore the same method with dumbbell flyes – bring you hands together at the top of the motion and then squeeze your pecs together hard. Yeah, we thought you’d feel it. 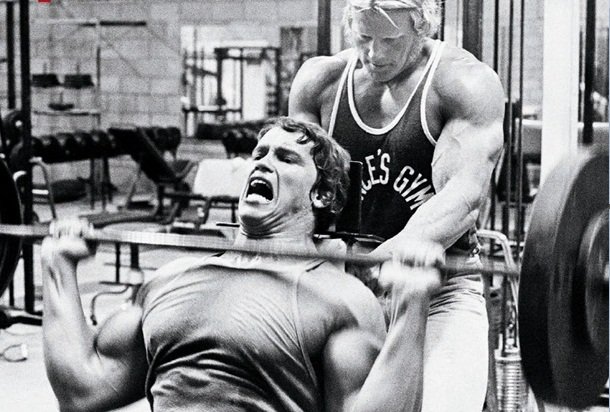 IT’S ALL ABOUT ANGLES

As you can probably guess by now Arnold likes to keep things creative, and the incline bench press is no different. This exercise works specifically on your upper chest and you can highlight them even further by changing the angle on the bench. Arnold is documented saying he would hit this from anywhere from 15% to 50% all in the name of muscle confusion, just so he can express those tiny muscles in his genetic frame that are uniquely his. And you can do this too. 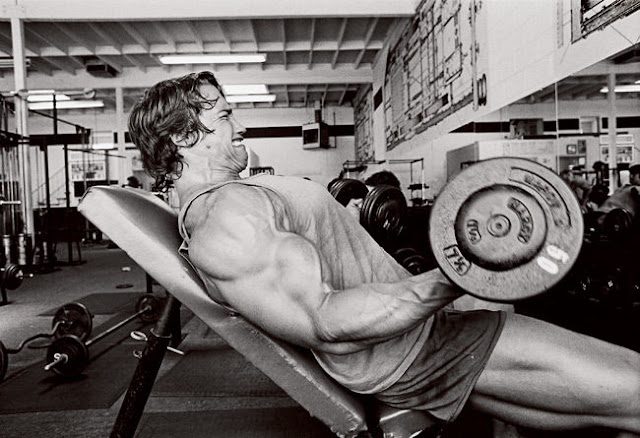 MUSCLE CONFUSION, MUSCLE CONFUSION, AND THEN MORE MUSCLE CONFUSION
As a sort of bonus section, we decided to throw in random things that just made Arnold…Arnold. He would do randomly add in 5 rep max heavy days when his chest didn’t see it coming. He would also pause rep on his bench, alternating range of motion from full, to half, to a quarter. He would also throw in things like drop sets and force sets, just cause. If you don’t take away the exercises in this article, at least take away the mindset. Controlled craziness is the key to not just building a chest like Arnold, but building a chest like the best you.